The University of Edinburgh’s Head of the Medical School and Director of MRC Centre for Inflammation Research, Professor Moira Whyte, has been appointed as Vice-Principal and Head of College of Medicine & Veterinary Medicine. 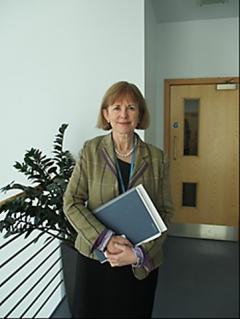 She succeeds Professor David Argyle as he stands down after six months as interim Head of College.

Professor Whyte is a respiratory physician who trained in academic medicine in London.

In 1996, after completing MRC and Wellcome Trust Clinical Fellowships, she moved to the University of Sheffield as the inaugural Professor of Respiratory Medicine. She remained there until 2014, becoming head of a new University Department of Infection and Immunity, member of the Faculty Executive and latterly Professor of Medicine.

She was appointed Head of the Medical School in 2016.

I am absolutely delighted to be appointed the new Head of College of Medicine and Veterinary Medicine, and build on the work of Professor Sir John Savill and Professor David Argyle. I look forward to continuing to work with colleagues across the College, and help lead it into its next chapter.

Professor Moira WhyteHead of College of Medicine and Veterinary Medicine

Professor Whyte's research interests have focused on chronic inflammatory lung diseases and understanding of host defences against bacterial infection in the lung.

She received an OBE in 2014 for services to respiratory medicine.

I warmly congratulate Moira on her appointment and very much look forward to working with her in her new role. I would also like to express my sincere thanks to Professor David Argyle for serving with distinction as interim Head of College over the past few months.